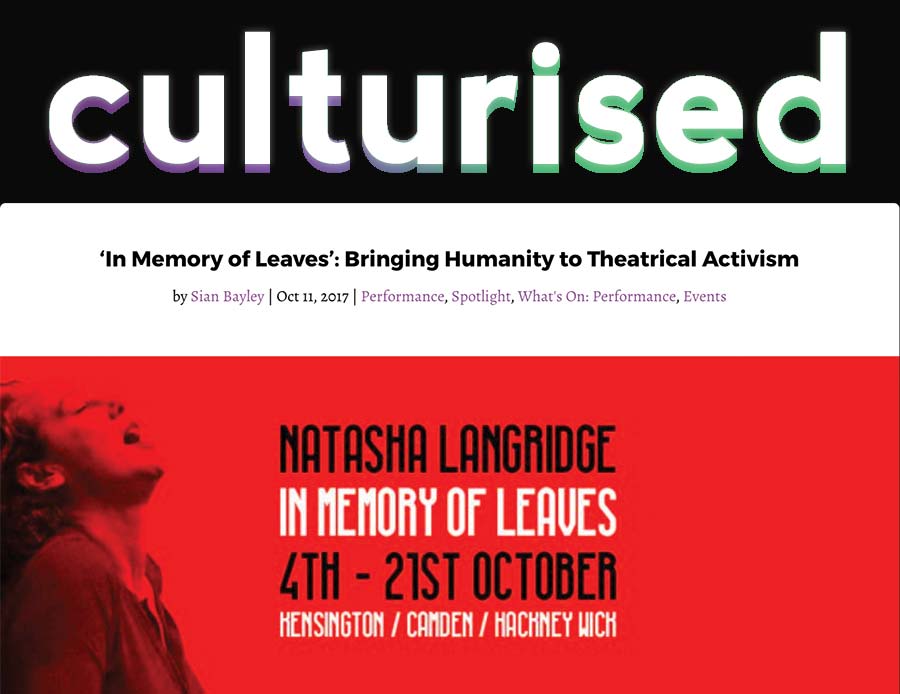 This a key part of Natasha Langridge’s solo play In Memory of Leaves, which follows Natasha’s life in the wake of the destruction of her home on the Wornington Green Estate in North Kensington. Performed on a boat that is mooring at different locations in London this autumn, the audience must necessarily cosy up to one another and become aware of their ever-changing position in the capital city, as they create a community without a fixed location. 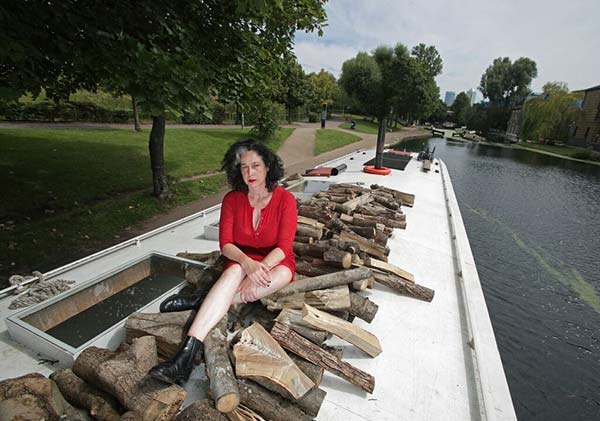 Originally performed in 2016, this updated version of the work strongly resonates with the anger experienced by Natasha’s local community in the wake of Grenfell Tower earlier this year. Natasha’s play has always been focused on housing and how poorer Londoners have been pushed out of their homes due to gentrification, but it now has an extra bite. She almost spits the name of the Royal Borough of Kensington and Chelsea and frequently shouts in her calls for justice. It is clear who she believes is to blame for recent events.

An overtly political play, In Memory of Leaves incorporates most of the well-known social justice issues of the last few years, including Occupy and the Calais refugee camp. It is often angry, but it is the feeling of desperate hopelessness that is conveyed most strongly to audiences. When in Calais, Natasha becomes increasingly frustrated that she cannot help her refugee friends get into Britain. Their poverty becomes “ugly” to her, to the point that she cannot bear it any longer, and yearns to go back home. She begins to hate them, despite knowing that she should hate “it” instead – by which she means the systems and politicians that allow these terrible things to happen. But she cannot help becoming the very person she had been fighting against back home. Poverty is horrible to witness and impossible to deal with. She’d rather not have the responsibility at all.

This aching awareness about her own failings is a welcome move in activist theatre. Too often political works preach without leaving room for making mistakes and being human. In Natasha’s work, however, ordinary life is narrated alongside community issues. She gets caught up on her lover Dave, and obsesses over one of her attractive drama students, all while fighting for her home and the cherry tree that means so much to her.

Natasha is a wonderfully likeable local woman with a powerful voice. She knows her audience well, and makes an effort to interact with them by hiding props underneath their seats, sitting alongside them, and looking directly into their eyes. She’s mesmerising to witness in action. In Memory of Leaves is an intimate work that forces its audience to engage with the issues being discussed and evokes a strong emotional response, most notably as she narrates the events of Grenfell. It is a hard-hitting scene, beautifully told and incredibly moving to witness. Grief is palpable in the air, and the silence that follows is devoted to the memory of the victims. 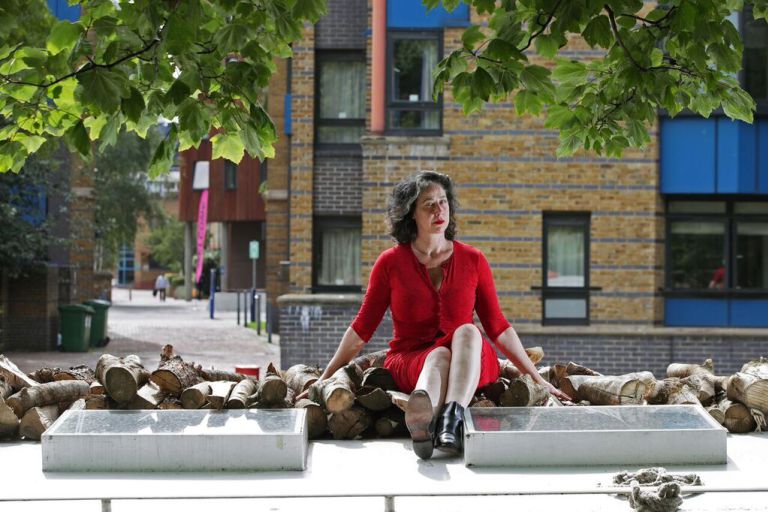 At the conclusion of the performance, as Natasha prepares to leave her home for good, she etches a message on the bottom of the boat. It is a heart. Simple enough, but a strong symbol for the need for love and unity in protest. She encourages the audience to leave their own messages, adding another emotional dimension to the performance as the public rushes forth with messages of compassion and understanding.

The play inevitably suffers from the classic issue of activist theatre of preaching to the converted. Natasha’s audience is full of left-wing writers, campaigners, and angry residents of Kensington and Chelsea who enthusiastically cheer along to the chants of “Oh Jeremy Corbyn”. In this instance, however, this should not be criticised. Natasha’s work speaks to the community she lives in, and those sympathetic to the issues they face. It is not intended to be a nuanced work of balanced arguments. Instead, it is a community led piece of activist theatre that serves its grieving audience. In light of this, I must describe it as a triumph.

In Memory of Leaves is playing at locations in North Kensington, Camden Lock, and Hackney Wick from 4th – 21st October 2017 for more information and tickets visit here.